As a reference guide this book is brief and to the point, listing the most salient information formatted chronologically. In this respect it functions as a very convenient field guide. The no–nonsense black and white archive photos, taken mostly from promotional literature, present the oldest, most familiar images of each tractor in its moment of inception. Just $16. 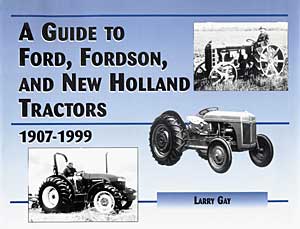 In A Guide To Ford, Fordson & New Holland Tractors 1907-1999 there’s quite a bit of information about the Fordson, dubbed in the first chapter as “The Tractor That Dominated the Market,” and there’s no stinting on all the permutations of this tractor, beginning with the earliest Ford experimental tractors, then, from the “F” to the “All–Around,” indicating the factory of manufacture as well. This chapter closes with a few more experimental tractors that may be considered the bridge to the N and beyond.

The next chapter, “The Hitch That Changed the Industry,” summarizes the Handshake Agreement. Though this topic is often on our N–News pages, it seems there’s some new, little fact or two with every re–telling. Included here also is a brief but interesting section on the Sherman Transmissions and the Funk Conversions.

Next is “Multiple Models with the Hundred Series” to cover the development of the NAA, the 600–800, the 700–900, the Fordson E27N and Fordson Major, and the Dexta series. New diesels and Offsets are mentioned here, too.

The final chapter, “A New Era as a New Company” covers the purchase of Ford–New Holland by Fiat, and the change to the New Holland logo. It is quite interesting to see a summary of all that the company now represents.

This book also includes all the Nebraska Tractor Test Results on Ford and Ford–related tractors from 1920 to 1999, including the Observed PTO Horsepower and several useful specs on each model.

Next, several pages are devoted to all the serial sumbers, and known production figures are given from 1917 to 1990, the last full year of production by the Ford Company. This may be the first time that Ford’s production numbers have been published in one place. In fact, this may be the best reference available about Ford tractors. This book sell for $16 plus shipping.