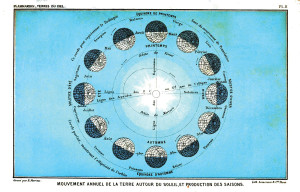 For whatever reason, I have always looked upon spring and autumn as transitional seasons. Of course, they represent a demarcation in a cyclical solar event, our trip around the sun every year. We just passed the point at which the earth is half way towards its opposite solstice, the longest day of the year, June 21th . (The other is the shortest day of the year December 21st). The spring (or vernal) equinox, March 20th and the autumn equinox, September 22rd, are the two days a year when the sun is directly over the equator, meaning both the northern and southern hemispheres have the same day length. It feels spring and autumn are the most volatile of seasons, not a moment of balance and harmony. They seem to be harbingers of a very different environment just around the corner.

As we come out of one of the coldest winters in a long time, spring feels like a breath of fresh air. Warmer days are ahead, so is rain instead of snow. Green grass still seems unfathomable, although we have started many vegetable plants under the lights in the house, and I can almost remember what fresh basil and tomatoes smell like, so it must be possible. But, before we can get there, we have to survive mud season.

Vermont has about 8000 miles of unpaved roads. What makes for a quaint walk up a dirt road in mid summer, could be a complete quagmire in April and even May. The road turns to muddy grease as the top layers of dirt thaw but the ground underneath and alongside the road is still solid as a rock. The water has nowhere to go, hence the mud. But that is OK in my book. For three or four weeks I will do my best to avoid dirt roads when I can and take the pickup when I can’t. I will enjoy hearing the stories of how deep the mud is in the middle of East Orange, Washington or Chelsea. I might even set up a lawn chair along side a particularly deep wallow.

Having pancakes with fresh maple syrup will be one of the sweet consolations for the next month or so, as sugaring season runs alongside mud season. That and trying to imagine the lush, velvety tang of a slice of tomato, a whole leaf of basil and thin slice of mozzarella all while sitting on the back porch on a warm day.