By Bob May. Published in the N-News.

Collecting sure seems to be in Robert May’s blood! After all, it is hard to be interested in old tractors without eventually acquiring at least one piece of iron. Once bitten, the disease often leads to a chronic condition, and before you know it, the barn is full. Of course, collecting tractors is pretty benign compared to some other obsessions. Motorcycles, gambling and fast women are all much more likely to end in tragedy (or at least divorce court). So, in the big picture, an old iron hobby isn’t all that bad.

Grandpa Bob and Alana out for a ride

Robert Mays started collecting tractors fifteen years ago, but his passion for tractors began long before that. Robert’s father owned a small nursery and Robert did a lot of “healing in” of trees and assembling of walk-behind mowers and Planet Jr garden tractors.

Nick giggles with excitement anytime the tractors come out!

When he was twelve, his father died. Robert was taken under the wing of Warren Lawn, the farmer across the street. Robert used to walk to Mr. Lawn’s place with an older brother when he was a young boy. They would carry a glass gallon jug that would be filled with raw milk just after it was cooled. Drinking the cream off the top was a real treat. Warren had an 8N and Robert would often ride along while the neighbor plowed the field. There were some real tractor adventures, like when Robert got covered in chicken manure while spreading with the 8N, leaning on the fender, “one foot on the axle, one on the running board, you know, 8N style.”

All the grandkids lined up on a rig! Dani, Jessie, Nick, Marisa and Alana (L-R).

When Warren’s family came to help with the big harvest, they arrived with all sorts of tractors – John Deeres and Farmalls. Somehow, those rigs didn’t strike Robert the same way the little 8N did.

Another neighbor, Walter Goerke, taught young Robert how to gas and electric weld and to work with metal in general. Walter was a tool and die man in the 1930s and 40s. Robert welded his first conduit framed mini car at the age of 13. By age 15, he had replaced a six-cylinder engine with an early Hemi V8 in his first car, a 1949 Chrysler convertible.

Grandson Nick riding along on the Oliver.

Eventually, Robert worked as a drafting trainee at Trojan Tractor Loaders and that led to attending night school to become a draftsman. Robert started working for Eastman Kodak in 1968 until his early retirement in 1992.

As a retiree, Robert’s passion for metal work and old iron was rekindled. Besides several Fords, there is a list of other brands that keep his interest. Robert even has some of the tools from his youth – a few hand push Planet Jr cultivators and his father’s original rototiller. Obviously, the collecting gene was there the whole time! 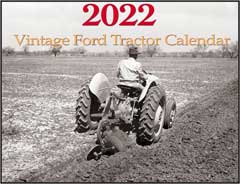