By L Timothy Knutson. Published in the N-News. 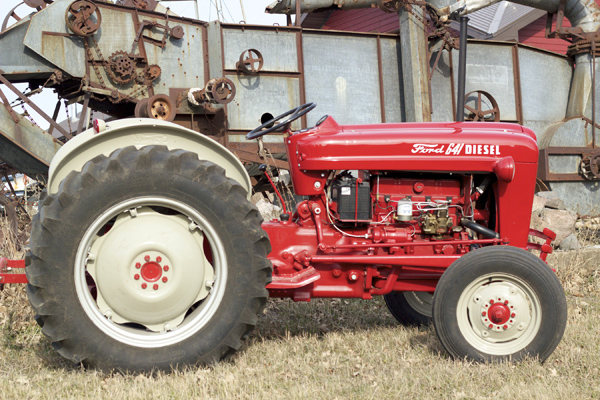 It’s always nice to have a project waiting in the wings.  In the summer of 2008,  I had started to work on my 740 (see Volume 26, Number 4, Autumn 2011), but I was already thinking about my next restoration project. My urban environment does not provide me with too many farm auctions, so I peruse the internet for interesting material. It was during one of these web searches that I saw an ad for a 1962 Ford 601 Diesel. The tractor was at a dealership in a small town SE of Austin, TX – not far from where my son and his wife live. The asking price was a bit higher that I was prepared to pay, but on a whim, I made the call.

The sales manager was very friendly and provided me with some background on the mechanical work their shop had done on this tractor.  It appeared that they had owned it for a while and might be motivated to move it, so, I made a low-ball offer. The sales manager said he’d have to talk to the owner and would call me back. To my surprise, he called me the next day and countered with a number not too far north of my offer. He faxed me a copy of the shop work summarizing some pretty extensive mechanical work, including an engine overhaul.  We settled on an agreeable price and I sent in a deposit. 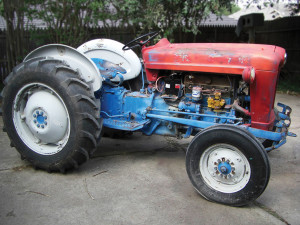 It was perhaps a month or two later that my wife and I made the trip to Austin to visit our son and his wife, trailer in tow.  The next morning, Carl and I set off to find my tractor.  We reached the dealership in about an hour.  I had called the sales manager in advance to let him know we were coming and he was waiting for us.  Although the battery was dead, the tractor started easily with a pull and it ran sweet. Although, from a distance, it had the appearance of a 641, as I looked it over something didn’t seem right. The gearshift lever was not from a 601 series tractor and I noticed that the center of the steering sector cowling had been cut out and a new piece of sheet metal had been riveted in.  This tractor had almost certainly started life as a 671-D (a 601 with the Select-O-Speed transmission).  Like many tractors of its era, the transmission had likely failed and some previous owner had pulled it and replaced it with a manual, 4-speed transmission. On closer inspection, I realized that the transmission was from a 100 series tractor.  While it was properly bolted in place to the differential/hydraulic housing and the engine, the brake and clutch linkages function differently than the x01 series, later model Fords. Well, the tractor ran nicely and I had already paid for it, so we loaded it.

While we were completing the paperwork, I asked the sales manager if he knew of any implements from that era of Ford tractors. He mentioned that, on a recent bicycle outing with his wife, they had peddled past a farm not too far from there, where the pasture along the road was littered with old implements.  Certain that this field would hold something of interest to me, my son and I went in search of this farm, following directions provided by the sales manager. 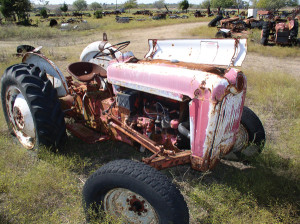 The transmission donor from the farmer’s old equipment field.

The pasture was immediately recognizable, holding several old Ford tractors and mounds of rusting steel. The owner was not home, but his wife gave us permission to explore. In the farmyard were a few newer vintage Ford tractors, but it was the old ones that held my interest. Along with three or four N series tractors, there was a 640 that looked like it might run and a 641 that looked like it hadn’t seen life in many years.  As luck would have it, the 641 had the transmission I needed.  The implements were well past useful life and probably only had value as scrap.  I took some pictures, got the owner’s name and a phone number, and we headed back to Austin.

The following week, I contacted the owner.  Feigning interest in the 640, I casually asked about the 641.  With his asking price as a reference, I made arrangements to come for another look. A couple of weeks later, I headed back to Austin, trailer in tow.  After picking up my son, we drove to the farm, near Shiner, TX.  After exchanging pleasantries with the farmer, we briefly discussed the 640, but quickly moved on to the 641.  Upon reaching an agreeable price, I loaded it onto my trailer, using a winch that I had installed on my trailer a few weeks before. 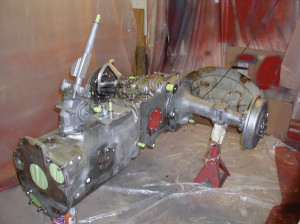 Now I had more tractors than my shop would comfortably hold.  Before I could continue work on my 740, I would have to completely disassemble this “parts tractor.” Both front tires were completely shot as well as one of the rear tires.  The second rear tire, while very flat, held air when pumped up and was salvageable.  All rims were in good shape.  The sheet metal was pretty sad.  The hood and grill were beyond hope, but the fenders and the steering assembly cowling were usable.  I was also pleased to find that the fuel tank was in good shape, since the fuel tank on the 641-D was an aftermarket variety that was not a keeper. 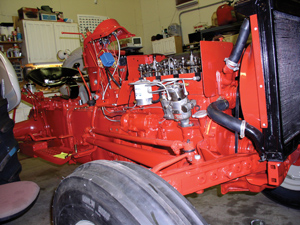 I was anticipating that most of the bolts and nuts would be rusted tight, but was pleasantly surprised that they released without much struggle.  In a couple of days, the tractor was reduced to parts on a shelf plus the large sections stowed off to the side.

It was January 2010 before I finally was able to fully return my attention to the 641-D.  My daughter, Ingrid, was temporarily back at home, and for Christmas, one of her gifts to me was a day of her time helping me in my shop.  It was nice to have her to myself for a day. She was also an excellent assistant, willing to get her hands greasy turning wrenches.  Together, we tore down the tractor and split it to trade out the transmission for the one previously attached to the 640.  That transmission still had oil in it and no water or apparent rust.  Making good use of my “cherry picker” engine lift and with her able assistance, the process proceeded pretty smoothly.

Next stop was a trip to have all the paint stripped.  By mid-February, I was ready to prep it for painting.  Before doing so, however, the steering assembly was torn down and the bearings and seals were replaced.  Gaskets for the transmission shift plate cover and the lift cover had already been removed and would be replaced with final assembly.  First, the residue from soda/sand blasting is removed and neutralized.  Then the sand-blasted steel was wire-brushed bringing it down to bare, shiny steel.  After a final wipe-down with a grease and wax remover, it was ready for the paint booth.

The first coat was an etching primer that goes on and dries to a light green. A sealer coat followed and last, the final Ford red.  If everything goes smoothly, all coats are applied, in sequence, on the same day.

Since I had the documentation of previous mechanical work, very little of that was done prior to re-assembly.  The hydraulic lift linkages were checked to be sure they were within tolerances and a new clutch installed, but beyond new gaskets and a few new seals, the tractor was re-assembled without major mechanical work.  The only work to the engine was a valve job to the head.  The tractor as it was purchased, had an alternator that was replaced with a generator and all new wiring, plus several new gauges were installed.  One new rear tire was purchased so both tires would match. 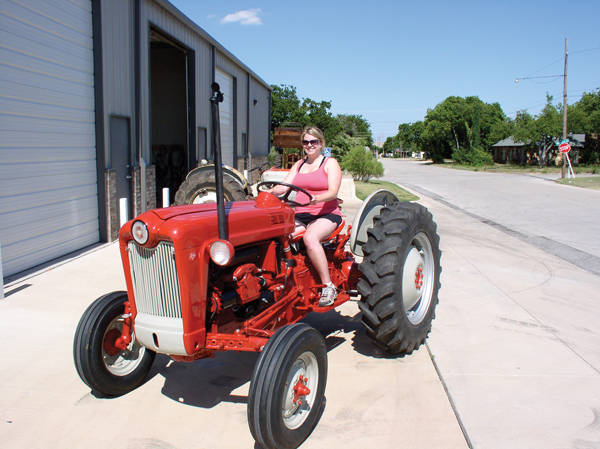 Ingrid takes the 641D out for a test drive. 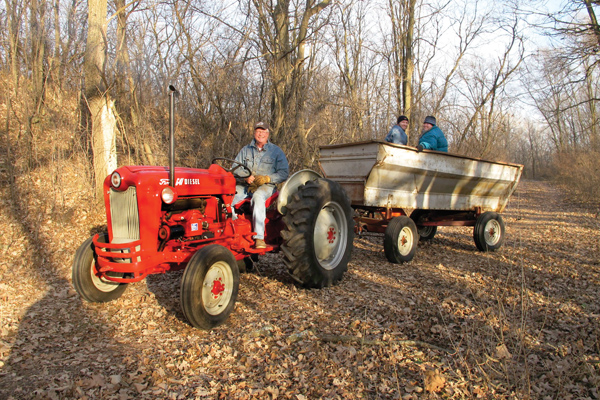 641D and wagon – out collecting firewood.