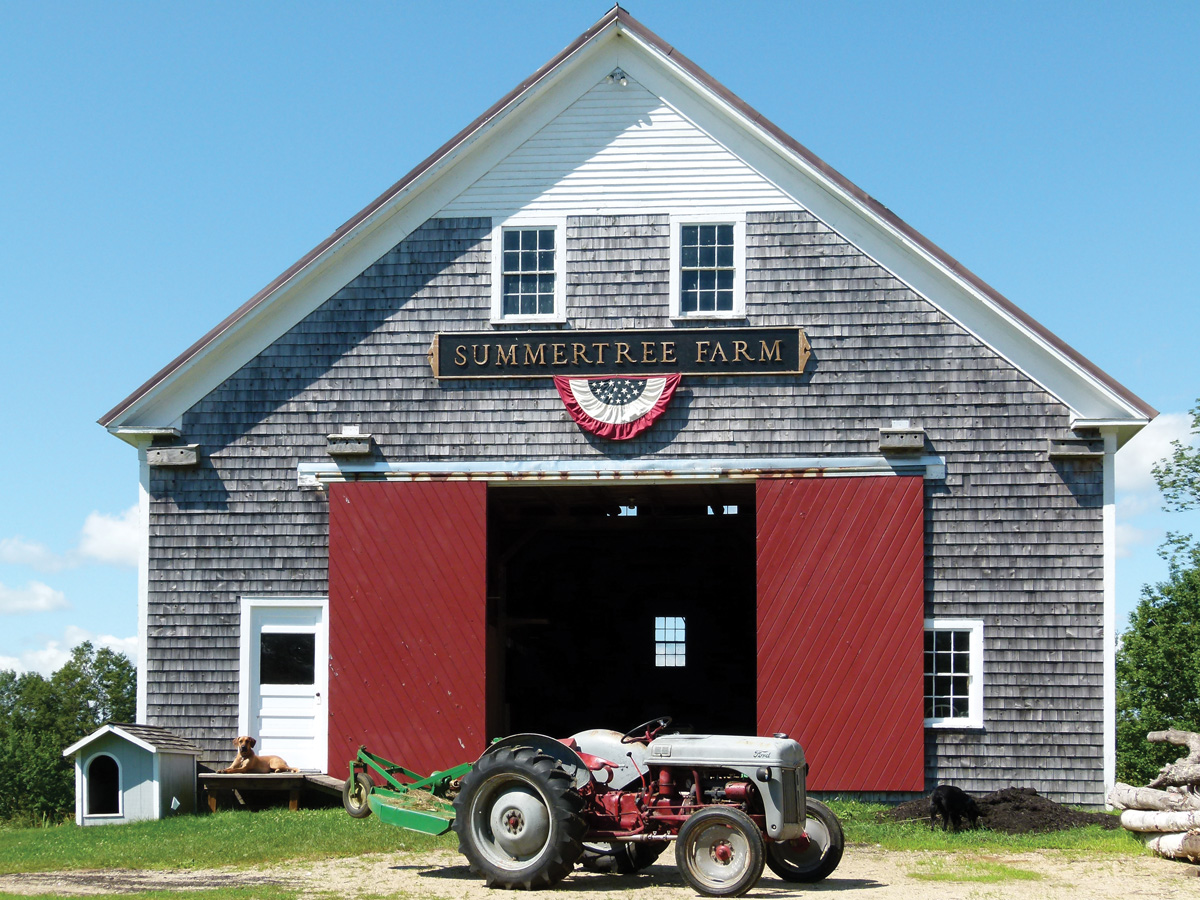 When my wife took me on my first trip to her home state of Maine, I was hooked. Growing up in the Southwest leads to a bit of green envy and water lust. Maine is just the state to satisfy both of those wants. In time, I was able to convince her to move back to her home state. We bought an old farm, and what’s a farm without a tractor?

Growing up, we always had Internationals, so of course my first tractor purchase was an IH Case 484. It worked great and moved snow efficiently enough, but when I found out my wife was pregnant, certain financial decisions had to be made. One of those decisions was to sell the tractor, with a plan to purchase another tractor at a later date. However, the winds of fortune were in my favor.

A good family friend heard that we had sold our tractor. He had an old tractor sitting on his lawn that had not moved in two or three years. He wanted it gone, or rather, his wife wanted it gone. The best part of the deal was that he was offering it to me for free! I was always told to never turn down anything for free so I jumped at it.

The tractor was a 1949 Ford 8N that had a transmission stuck between two gears. My friend said that it ran fine, but it had not moved for at least two years. He had tried the usual things to get it unstuck, but became frustrated. So it slowly turned into yard art.

On first inspection, the tractor looked to be in great condition. I looked at some videos and articles on the internet about getting the transmission unstuck, and they made the process seem pretty easy. I figured I would get the transmission unstuck first, then get the tractor running. Since I only lived 3 miles away, I would drive it home. In my mind, this would take two afternoons.

My friend had pulled the shifter cover off already and had also pulled the starter, so I was ahead of schedule. I hooked my truck up to the back of the tractor and pulled a little, thinking this would relieve some of the pressure on the gears. While the truck was pulling on the tractor I had one hand on a pry bar through the starter hole, prying on the flywheel and the other hand on a pry bar in the transmission, pulling on the top rail. I was able to get the transmission unstuck in just under 4 hours with only three busted knuckles from pry bar slips and a face full of old grease and rust. I figured my tranny woes were over because the tractor would roll back and forth as if it was in neutral. Now all I had to do was get the tractor running.

So after the nightmare of getting the starter back into the tractor and bolting the shifter cover back on, I was hoping for a quick start and a nice drive home. Wouldn’t you know it – the battery was dead. “Not a problem,” I thought. “I’ll just jump it with my truck.” Well, luckily, I had noticed a few strange things with the electrical system before I did that. First, it had a 6-volt battery (so does my smoke detector). Second, it seems these old blue ovals ground the positive wire instead of the negative. I went back to the internet for more research.

I found out a couple of things: one, people don’t really agree about the safety and procedure for jumping a 6-volt battery with a 12-volt and two, a new 6-volt battery is pretty darn expensive. Luckily, my neighbor had an old battery charger. With my new fully charged battery in the tractor, I was ready to drive it home, or so I thought. 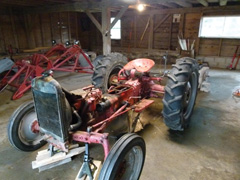 The 8N in the barn starting the split.

The tractor would not start and just turned over and over. Before the battery lost its charge, I checked for spark and boy, did it spark! I also checked the fuel path and everything seemed to be flowing well up to the carburetor, but not after it. “Oh great!” I thought, “Now I’ll have to rebuild the carburetor.” At this point, I called in reinforcements in the form of my brother-in-law who grew up with N tractors. With his help, we were able to identify the stuck needle in the carburetor and got it running, averting the rebuild.

At this point, the major problem was that it would only do two things – go into reverse and seemingly go into 4th. While in 4th gear, it would go for a few yards but then the wheels would lock up. This indicated a much bigger problem than I had previously thought. After a phone call to a buddy of mine with a trailer we were able to drive the tractor onto the trailer in reverse and roll it off in neutral into the barn.

I started the procedure of splitting the tractor by draining the transmission fluid out of the tractor, which by now had turned a milky brown color mixed with large chunks of 2nd gear. I then struggled with pulling the gas tank and awkward steering column off by myself.

The splitting of the tractor was a much larger struggle than putting it back together especially since the motor section of the tractor instantly wants to tip over onto its side. Luckily, I had plenty of blocking, an engine hoist, and a curious chicken to help me remember where everything goes.

Once the tractor was split I figured this was as good a time as any to replace the clutch. I found a good deal on a clutch online and I also found a complete set of used transmission gears on eBay. All told, I must have spent $150 on parts and the same amount on shipping. The installation of the clutch went smoothly and the disassembly of the transmission was easy enough as the gears do, indeed, slide out of the top of the tranny. Once I had both gear assemblies out it was easy enough to reconstruct the new gears in the right sequence using the old gears as a guide. 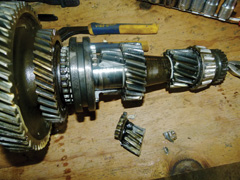 Assembly went rather quickly (about a day), but it did have some trials and a bit of finger crossing. The gear assemblies went in rather smoothly but the process does get grease all the way up to your elbows. When I was putting the end caps back on the gear shafts, I used the same shims that were on there before. I had read some articles about adding or removing shims in order to achieve the correct shaft- turning torque, but I hoped that the shims already being used would be sufficient. When it was time to put all the big pieces back together, putting studs into the bolt holes of the bell housings really did help. It does take a bit of prying, pulling, and 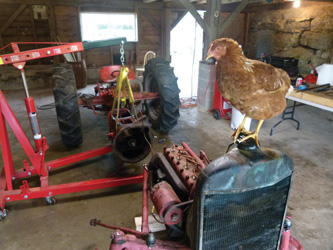 Red (the chicken) helped remember how to put the whole thing back together.

tugging to get the pieces mated up and if you’re like me and over tug on the rear end and the jack stands tip over it does help to have steel toed boots on. The tipping over of the rear end did help to get more unwanted sludge out. I am happy to say that the tractor is back in action and twitching wood, bush hogging, and plowing again.

My two-day project ended up taking three weeks to complete, but I couldn’t be happier with my 8N. The simplicity of these machines is perfect for my limited ability and this old tractor has plenty of life to give. 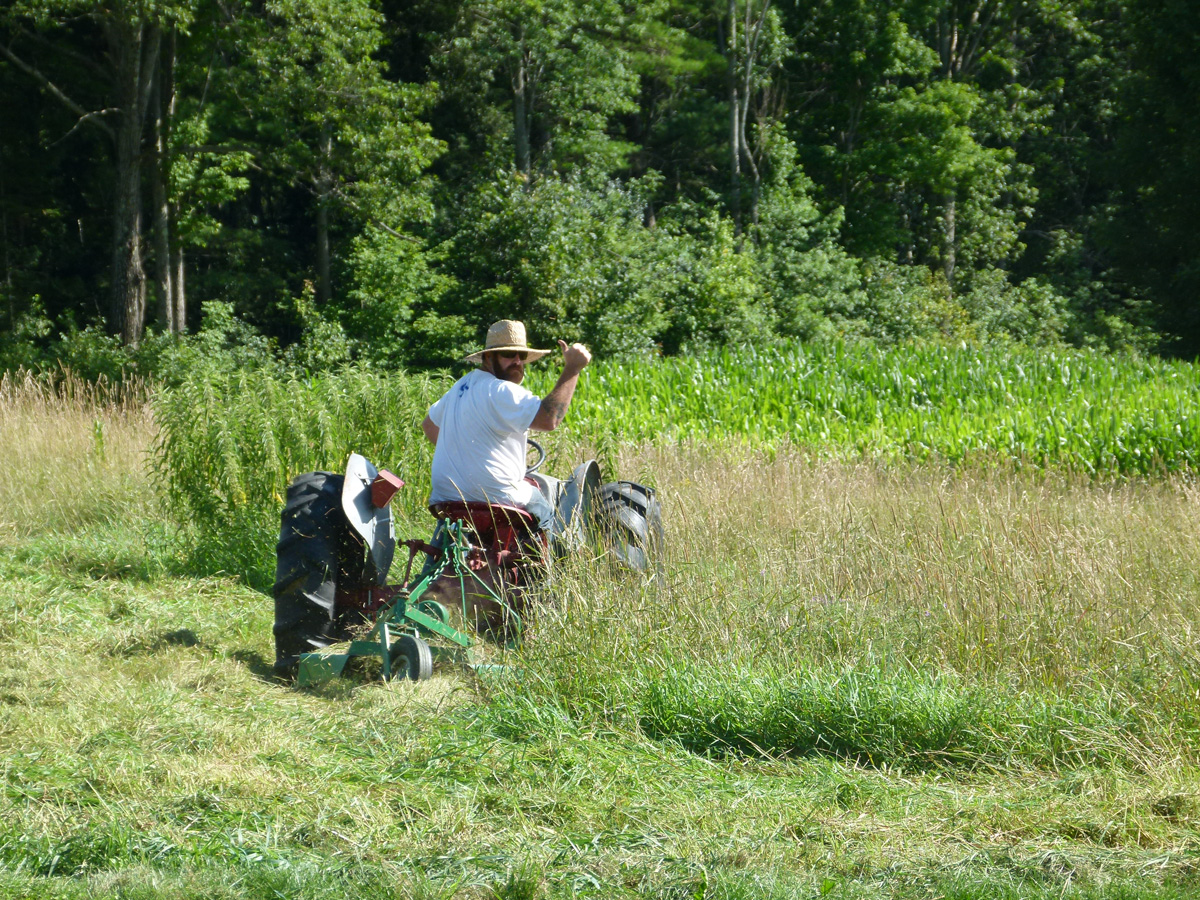