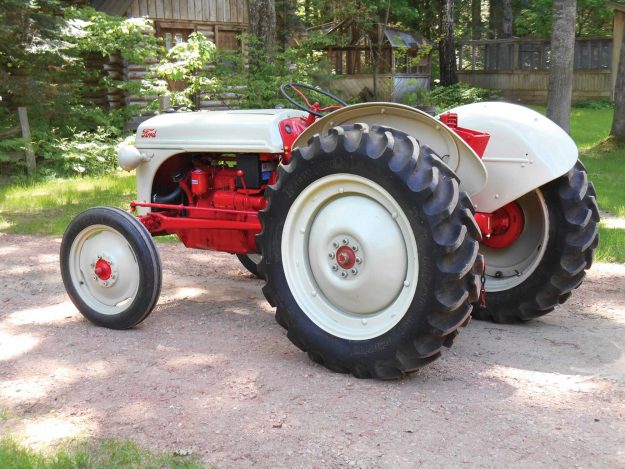 Solving a starting problem means you need to look at the possible issues and fix them as you find them…and there might be more than one!

I bought my 1948 8N as a partially dis-assembled unit almost 30 years ago. It became my youngest son’s first major restoration project with dad’s supervision. (And with dad paying the bills.) As I’ve always had other tractors around, this was never meant to be a worker. I keep it because of its history with us and also because of its historical significance as an N series tractor. I run it occasionally and drive it on our unimproved woods roads. It has always started and has never given any problems.

However, in early November I tried to start it and for the first time it was a “no go.” It surprised me as I’d run it on July 21st with no problems. (I keep a log of when I run the various vehicles that aren’t in regular use.)

Once in the shop, I found I had power to the coil but no spark. Normally this indicates corroded points and on a “normal” distributor it is an easy matter to remove the cap, dress the points and be on ones way. Not so on front mounted Ford distributor tractors.*

After changing the coil with no improvement, I pulled the distributor. I found the points to be eroded and they’d also never been properly aligned. Thinking the points were the problem, I pulled a tune-up kit off the shelf that I had purchased several years ago and installed new points. (I like to keep spares of tune-up parts for all my vehicles.) For this tractor, I had bought a Tisco tune-up kit. It included new points, plugs, condenser and rotor.

I installed only the points, re-installed the distributor but still no spark. So I took the distributor back off and now I was going to replace the condenser. The condenser that came in the kit was of very poor quality construction. It was only a little over half as long as the original and the bracket that is spot welded to it was very loose. With all that was wrong with it, and the hassle of installing it, I elected not to use it. 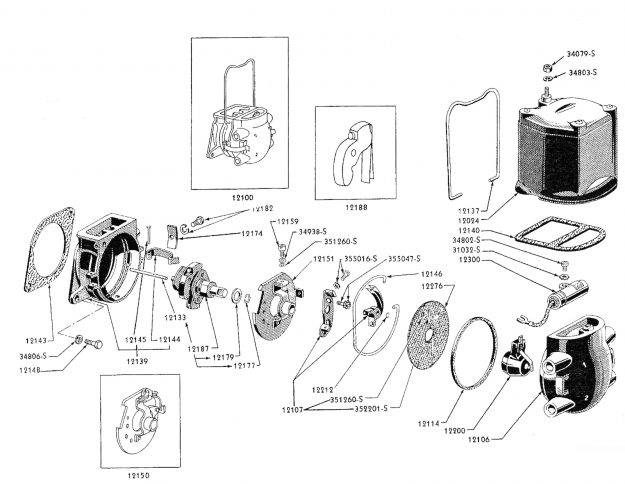 In my supply, I had a brand new condenser from NAPA that was probably also a few years old. I also have an original Ford script condenser that was in my 1941 pickup when I purchased it. (I never throw away original parts, if for no other reason than they are valuable for reference material.) That “older” new NAPA condenser was almost an exact duplicate of the original Ford unit, as was the one on the distributor.

I decided to reserve that condenser for my 1941 pickup and purchase a new condenser from NAPA. This was an Echlin brand, as was the other, but, oh, how things have changed! This new condenser was almost identical to the Tisco condenser and of unknown manufacture.

On this new condenser the mounting tab had two square corners. In order to make it fit into the distributor pocket, I had to clip off one of the corners. With that done, the hole in the tab did not line up with the attachment stud. At this point, I gave up, took it back to NAPA, showed them the difference in condensers and got my 14 bucks back.

I then installed the new “older” NAPA condenser. Back on the tractor with the distributor but still no spark. Back out again, (I had removed the generator to make access easier.) I took my multimeter and tested across the points with them closed and I did not have continuity. I pulled the points, dressed them on a knife hone stone, and this time bench tested them to make sure I had continuity before re-installing. Once again, the unit went back on the tractor. Finally I had a good spark.

The tractor ran although it had a miss. But I was still pleased it was finally running. When I shut it off, I happened to glance at the distributor on the way out the door and noticed I’d forgotten to install a spark plug wire where I had attached my test ignition wire. At least that problem was easy to solve!

The next day, the tractor was again very hard to start. Now it had to be carburation.

I disconnected the fuel line at the carb and turned on the valve at the tank to rule out a fuel delivery issue. The gas flowed freely. I removed the carburetor, disassembled it, checked it thoroughly and reset the float to factory specs. The carb kit instructions I had called for 1/4” measured between the gasket and the float. The factory specs were .25” to .285”. I measured a 9/32” drill and found it to be .277” (actually it is .28” by the math) and used this to set the float from the casting. 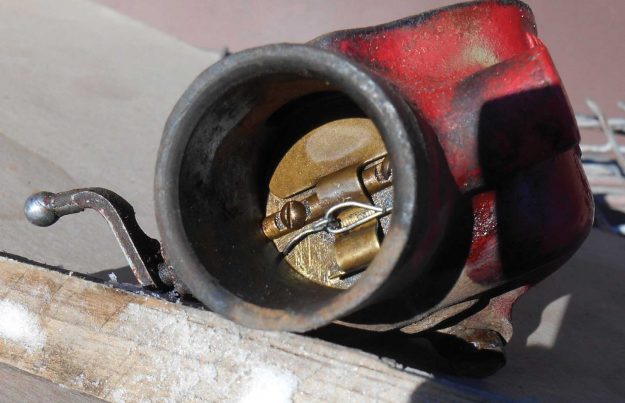 Looking at the carb choke plate and the author’s wired solution. The small spring is what was missing.

The carb was reassembled and as I was about to put it back on, I noticed the flapper valve on the choke plate just hung open. The little spring that holds it in place had broken and was gone. 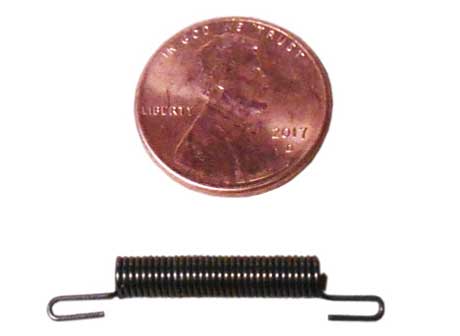 The small spring missing from the carb choke plate.

When choking the carburetor, I wasn’t, in fact, choking it. I wired the flapper valve shut as I do not know of another carb that doesn’t have a solid choke plate on it. At last, the tractor started and ran the way it should.

Total time: 19 hours – including some research time! So now for the lessons learned.

It is getting almost impossible to find good quality tune-up parts. In the past Echlin has been the best last resort and this seems now to have disappeared also. When these vehicles were manufactured they were very reliable, in part due to the high quality parts installed. Today, people look at them as unreliable. In the majority of cases, it is what is currently available to repair them. Whether it’s tune-up parts, bearings, mechanical parts, etc., they are generally of inferior quality compared to years past. (If someone knows of a manufacturer or source for original quality tune-up parts, please let us know.)

Don’t trust new parts right out of the box! The points I had new had corroded just sitting in the un-opened package. I now bench test everything as best I can before installing it. Things like coils and condensers are very hard to test and the best I can do is install them and hope. Finally double check everything. I had never given a thought to that flapper valve, but I sure won’t over look it in the future.

The problems were several. In my case two-fold. The first involved the points. With a good set of new points the tractor would have been running in a normal repair time-frame. The second was the choke flapper valve which I did not check until the very end. The original coil and condenser in the unit were probably good, but I did not reinstall them. The only way I have to test these parts is to install them and see if the tractor runs. I’ve labeled the original parts and saved them in my drawer of tune-up tractor parts.

I hope my experience may help speed others’ repairs when working with their early N tractors.

*In 1950, the 8N switched to having a side mounted distributor at serial number 263844, before that all N-series tractors had the coil and distributor mounted on the front of the engine.

Keith Johnson is a long time subscriber and contributor to the N-News Magazine. See his wonderful article about restoring a 1941 Ford Pickup with a 9N 4-cyclinder engine in Volume 28, Number 2, Spring 2013. Also see That Mystery Part: The Coil by Bruce Haynes in Volume 29 Number 4, Autumn 2014. Also, Another Mystery Part: The Condenser by Frank Scheidt in Volume 30, Number 1, Winter 2015.