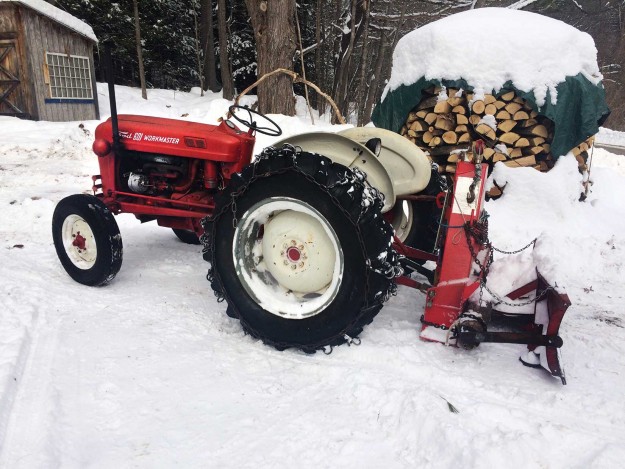 Thrift. noun. The careful use of money, especially by avoiding waste.

Making due with what is available is paramount these days. In taking over the 1799 farmhouse where I grew up, I’m finding no lack of ways to fill the short winter days in Maine. I built a lean-to style pole barn off the end of the house recently and did the whole project for around ten dollars. I needed a good dry place to keep my tractor and set to making that thought a reality.

I had bought this 1957 Ford 641 Workmaster the year before. After a few days of exploratory maintenance and minor upgrades, including changing all four major fluids, the old four cylinder Red Tiger engine breathed confidently with newfound glory. A steady heartbeat indicated its happiness to be free of a previously neglectful owner. Chained up, the 5500 lb. leviathan felt as if it could twitch a giant old pine off my land. In fact, a Kings pine wouldn’t slow it down. 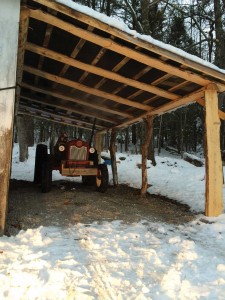 A hundred yards up the hill, behind the homestead, stood an arrow straight 80-foot tall white pine tree that I introduced to the ground with my chainsaw in the sharp early morning light. With that wonderful new tractor and a borrowed Farmi logging winch, I twitched the whole tree out of the woods and over to my work site on the other side of the house. With the magic power of hydraulics, I was able to single handedly (three point hitched-ly) lift the entire tree horizontally up onto two notched stumps to get it off the ground. In doing this, I was able to easily (as easily as possible, I suppose) peel all the bark off the tree with my hundred-year-old drawknife. My intent was to turn this tree into all the lumber I would need for the construction of this new weather foiler. Peeling the bark off makes the wood resistant to rot as it takes away a wonderful habitat for critters that eat dead wood.

Once peeled, I called on an old friend who came by with his 40 year old fire-breathing monster of a chainsaw. It had a special chain on it for cutting with the grain of the tree, or ripping, as its known among those who rip trees in half. We took turns manipulating the hungry yellow saw down the measured out chalk line dividing the tree in half, lengthwise. In mere hours, we had manufactured all the beams I would need for this 10-foot by 20-foot structure, and had one hell of good time doing it.

The next morning I began the day by notching in the rain. Well-swaddled in wool, I was wet but warm and eager to keep the project moving towards completion. As with many of my building jobs, the design and plan was an evolving process, constantly in flux based on the materials I was working with and the tools that were available. I used sticks and rope to do a mock up around the tractor. I measured and cut the mortises and tenons for the bent, or outside wall. I cleaned up the notches with a razor sharp hand chisel called a slick. With holes dug for all four end-posts, I was ready to put that pine back up in the air. Another friend fortuitously stopped by to say “Hi,” and I dragooned him in to helping me hoist the two 22 foot long half trees up into position on top of the vertical posts.

With the skeleton complete, I spent the next morning dancing on the rafters like a log driver as I lay down the skin. With salvaged roofing and bits of lumber from a shed that a neighbor was going to burn, I was able to patch together all the metal I’d need to cover the roof.

The back and the outside walls would be made of next winter’s firewood, each year new walls. The tractor and a few implements now have a nice dry spot to sleep in when we’re not out crawling around the woods and fields looking for ways to fill up the day with work. In only four days and for the cost of a little gas for the chainsaw, I was able to transform a standing tree into a structure that should last at least into the next century.

Sitting in the seat of the slumbering red mechanical ox, smoking my pipe and listening to the rain beat out its rhythm on the tin roof with dry slippers on made it all worth the work. Satisfaction.

I was hooked. This tractor I didn’t need, I now really couldn’t do without so then I found yet another use. Come late January last year, reconstructive ankle surgery slowed me down to a near stop. Going from working twelve hour days in the woods and around the house, to sitting day and night with my left leg in a cast proved far harder than I had imagined and my mental state began tumbling towards madness. I went from a bit over active to deeply sedentary in one morning.

Prior to my procedure, I’d rigged up a jenky quick-attach snowplow, which I could chain onto the Farmi winch still mounted to the three point hitch. After a couple hiccups, I was surprised by how well it worked, despite my fly-by-night engineering.

The Farmi logging winch increases the utility and versatility of my 641. I wanted to leave it mounted through the winter but also be able to plow snow, which facilitated the design and assembly of the Franken-plow. 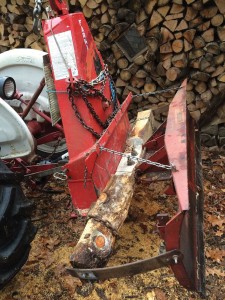 The Dearborn angle dozer blade was ideal for a quick mount system, plus it had been laying around (that is the “thrift” part). The semi-circle hitch on the plow has many large holes which gave me options for mounting it to a slab of pine left over from the construction of my one tree pole barn. I connected chains to the top of the plow which hang in the choker notches on the winch. That took care of being able to lift it.

I used a chain binder to connect the whole rig to the winch from the slab of wood. And for stability on edges, I happened to have a couple of broken leaf springs off my 1996 Ford F-150. It was with great fortune that the holes lined up perfectly. A couple of six inch lags anchored them in.

I was surprised at the efficacy of my homemade plow last winter at pushing around the vast depths Maine was blanketed in. It’s fun because it works, I only have one little driveway to clear and it didn’t cost much!

Two days after surgery, western Maine got muffled by two plus feet of light, bright snow. I wrapped the cast in a black trash bag and crutched out to the new pole barn where the red Ford ox slumbered. The upgraded 12-volt system fired instantly, in spite of the shattering cold. After fifteen minutes of warm up, the hydraulic fluid reached a viable viscosity and the “Franken-plow” was able to lift. 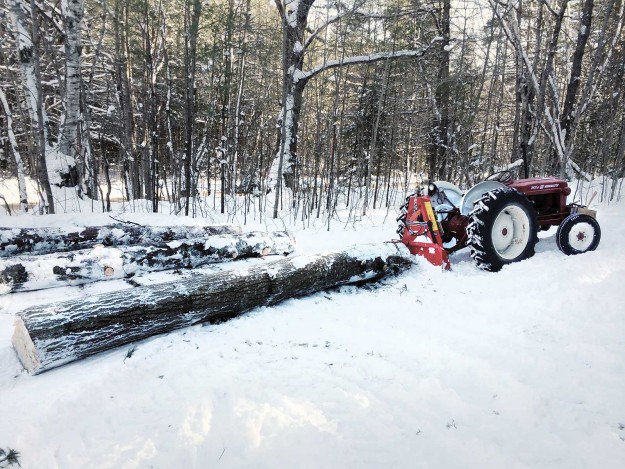 All the makings for a one-tree shed!

I awkwardly clambered up onto the seat and assessed my options of operation. By manipulating the clutch with my right foot and operating the brakes/steering with my right hand, I gained back a modicum of mobility and use, which I so desired. I must have looked like a flannel clad newborn moose.

The powerful tractor with loaded tires and chains showed no hesitation while pushing back banks. I was pleased beyond belief that my plow rig held up to the deep snow!

(I also own a 1946 2N and acquired a Dearborn angle plow, which I had used for years. But with less than half the horses and unloaded tires, the big storms posed quite a challenge. Plowing off the front was nice though.)

Confident in the 641’s ability, I began making passes down into my woodlot and fields. I would chug deep into the forest and kill the engine and listen – the ticking of the block as it cooled, the gathering herd of curious chickadees, and the random “whump” of snow sloughing off hemlock branches.

On one occasion, I barreled into a drift that was just a little too deep to cross and floated the frame, halting forward progress. It was a little touch and go for a moment, but reverse and elevated RPM dug the chains down into the sod and provided some serious traction. Worse case, I’d have had to swim/crutch the 3⁄8th inch logging cable over to a tree and pull myself out with the mighty winch.

Of the myriad uses for this tractor, I am delighted to report one more: a 49 horsepower wheelchair! 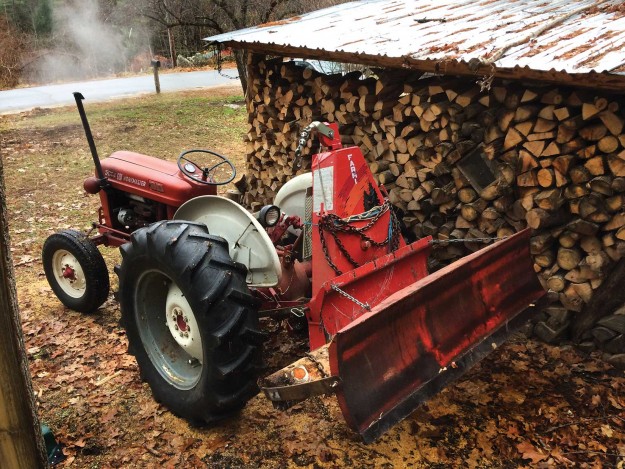 Gardener Waldeier has been a contributor to the N-News Magazine for several years. His stories, insights, photos and videos are always intriguing.