The Age of Genius: The Seventeenth Century & the Birth of the Modern Mind isn’t a philosophy book. This is a book proving that the 17th century was in fact a turning point in humanity relinquishing much of the ancient world for the beginnings of a “modern” point of view. A.C. Grayling is a professor of Philosophy and Master of the New College of Humanities in London who believes that philosophy needs to be integrated into everyday life. 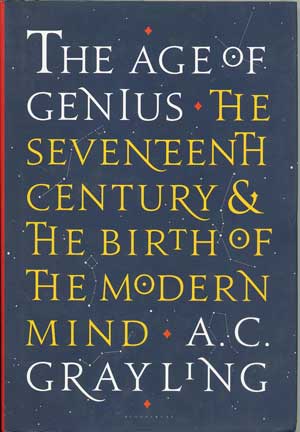 In the first paragraph, Grayling writes, “If you step outside on a warm clear night and look up, what do you see? Imagine answering this question 400 years ago. What did people see then, gazing at the stars? It is remarkable that in seeing the same thing we see today, they nevertheless saw a different universe with a completely different set of meanings both in itself and for their own personal lives. This marks a highly significant fact: At the beginning of the seventeenth century the mentality and worldview of our best-educated and most thoughtful forebears was still fundamentally that of their medieval predecessors, but by the end of that century, it had become modern.”

Much time is spent considering the Thirty Years War and how it affected the religious and geographic changes in Europe. There is a wonderful bit of history here. But what makes this so intriguing is the idea that “modern” thinking began long before the 19th and 20th centuries.
Hard cover, 330 pages, originally $30 now as a remainder, $15.95.