Agriculture has been a touchstone of security and growth for humanity since we gave up our hunting and gathering ways. This book is a chronology of writings on agriculture, which detail the history of how we as Americans have embraced, rebuffed and re-embraced the ideas (and ideals) of agriculture and the agrarian lifestyle. $14.95. 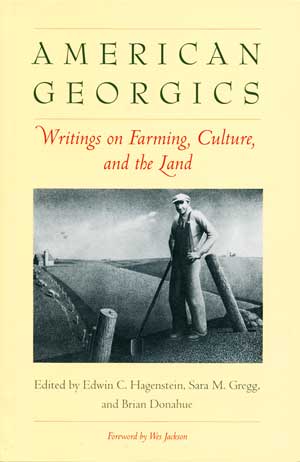 In the short history of the United States, agriculture was a foundation for the founding fathers. They knew the basics of growing a nation and an economy based first and foremost in growing and providing food. In a letter from 1785, Thomas Jefferson wrote, “Cultivators of the earth are the most valuable citizens. They are the most vigorous, the most independent, the most virtuous and they are tied to their country and wedded to its liberty and interests by the most lasting bonds.”

These individual essays move from Jefferson’s musings to the first “back to the land” movement of the late 1800s through the Industrial Age and into the second back to the land movement. This is a history book of the first order, edited by Edwin C Hagenstein, Sara Gregg and Brian Donahue.

If you have an interest in American history and how it intersects with agriculture, this book is for you. Hardcover, 376 pages plus reference, it originally sold for $37.00, now as a remainder book via the N-News, only $14.95 plus s&h.